President Joe Biden is listed as an ‘accomplice’ in six alleged white collar crimes in an explosive 634-page report on the contents of Hunter’s laptop by a right wing transparency organization, obtained exclusively by DailyMail.com.

The report – published by founder Garrett Ziegler, a 26-year-old former Trump White House aide – claims that Joe is complicit in tax evasion, violations of the Presidential Records Act and the Foreign Agents Registration Act (FARA), and using nonpublic information from a government job for financial gain.

The six incidents involving Joe listed in the report span from June 2010 to December 2016.

The report come days after DailyMail.com reported a White House lawyer had sent Hunter and his business partner emails about then-Vice President Joe Biden’s taxes in 2010, calling into question the president’s claim that he had no financial link to his son.

Marco Polo’s report combs through the emails, texts and pictures from the First Son’s abandoned MacBook Pro in painstaking detail and is designed, according to Ziegler, as a guide for both law enforcement and congressional investigators for ‘what to subpoena’ to build a criminal case.

It has been sent to all 535 members of the House and the Senate.

Neither the White House nor Hunter’s lawyers responded to DailyMail.com’s requests for comment.

But in combative text messages with a Marco Polo operative on Monday, Hunter’s Hollywood attorney Kevin Morris called the report a ‘package of libel.’

In one May 2016 email highlighted in the report, John S. Flynn, a senior advisor to the vice president sent Joe a schedule for his call with then-Ukrainian president Petro Poroshenko – and copied Hunter in the message.

Hunter was on the board of Ukrainian gas company Burisma at the time.

‘Boss–8.45am prep for 9am call with Pres Poroshenko. Then we’re off to Rhode Island,’ the email said, and attached a Microsoft Word document with a briefing.

Marco Polo claims that copying Hunter in the VP’s schedule constitutes a use of nonpublic information from a government job for financial gain, which allegedly violates section 2635 of the US Code of Federal Regulations.

Flynn sent the message to an alias email address Joe used under the name ‘Robert Peters’.

The report claims Joe also ‘illegally utilized his private, alias email address’ under another pseudonym ‘Robin Ware’ in a 2012 conversation with Secretary of State Antony Blinken, who was then National Security Advisor to the VP. 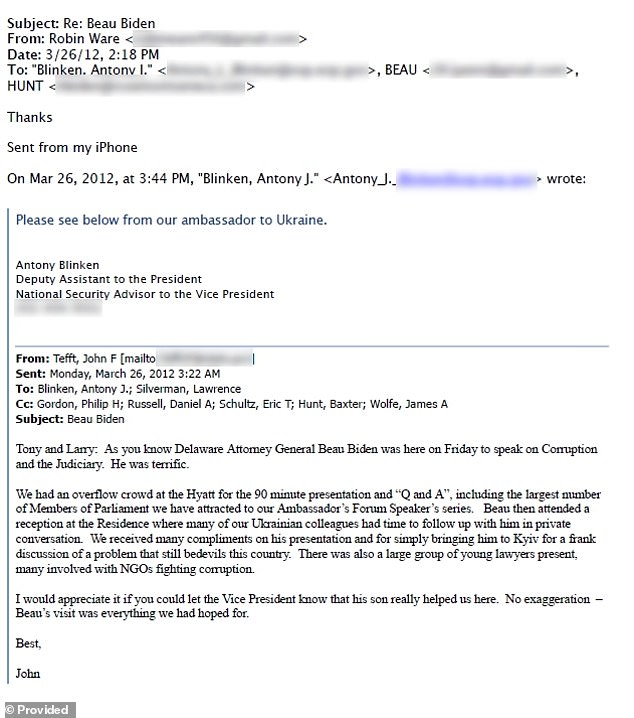 The Presidential Records Act requires the VP to turn over all official records including government-related communications to the National Archives and Records Administration for preservation. It is unclear whether that occurred with emails on Joe’s private addresses.

Marco Polo claims that Joe was involved in attempted tax evasion by failing to declare to the IRS the alleged gift of having thousands of dollars of his personal bills paid by Hunter’s company.

The report points to June 2010 emails from Hunter’s business partner in his Rosemont Seneca consultancy, Eric Schwerin, which list $5,227.09 of bills including home maintenance and insurance.

‘I am not sure which ones are a priority and which should get paid out of ‘my’ account,’ Schwerin wrote.

Schwerin wrote: ‘Your Dad’s Delaware tax refund check came today. I am depositing it in his account and writing a check in that amount back to you since he owes it to you.’

The Washington Post reported this month that agents believe they have enough evidence for Delaware prosecutor David Weiss to charge Hunter with tax and gun crimes. 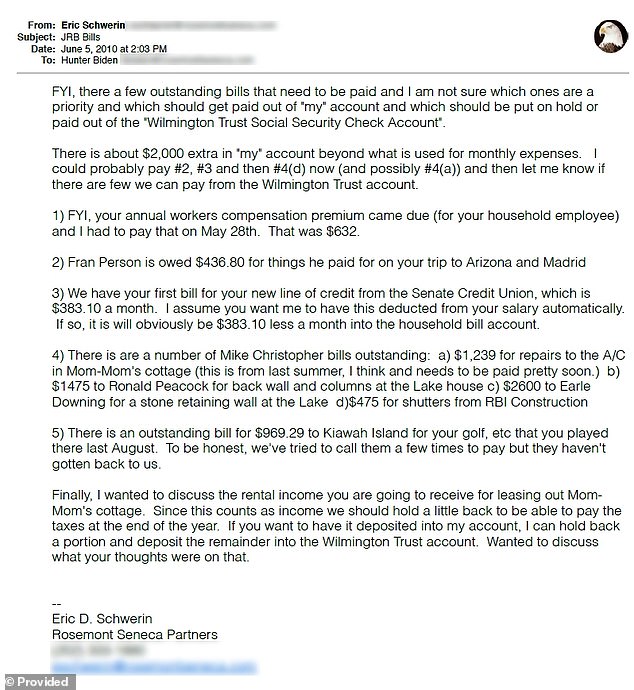 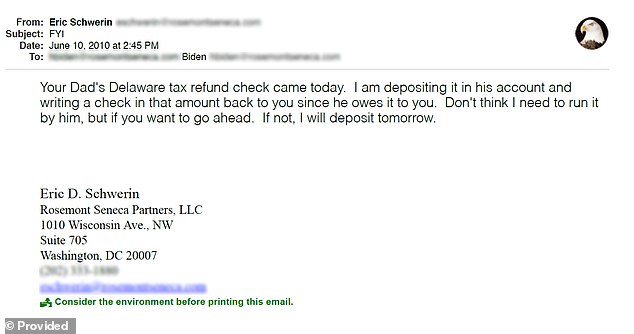 The shocking document also makes outright accusations of criminality by Hunter and his associates.

It accuses Hunter of a FARA violation by intervening on Burisma owner Nikolai Zlochevsky’s behalf with the State Department to resolve a visa issue for the oligarch’s trip to Mexico in 2015, without Hunter registering as an agent of Burisma with the US government.

Ziegler’s wrote the report after almost two years of research with the help of private investigators and lawyers on his team.

Among the reports revelations are apparent contradictions in statements Hunter made about a 3.16 carat diamond gifted to him by his Chinese business partner with links to the Beijing government.

His estranged wife Kathleen found out and her lawyer emailed Hunter’s, asking for ‘proof that the diamond has been placed in a safety deposit box’.

His attorney, Sarah Mancinelli, wrote: ‘There is no diamond in Hunter’s possession. I don’t know where Kathleen is getting access to this information, but on this score, what your email purports below is inaccurate.’

In subsequent media interviews claimed he gave it to an associate and never saw it again.

But the Marco Polo report points out that Hunter changed his story, claiming he gave it back to Jianming.

One of Kathleen’s divorce filings says: ‘Mr. Biden now admits, through counsel, that he was in possession of a diamond, but asserts that it has been returned to the entity that gave it to him.’

Pictures on the laptop show Hunter photographed a stone matching its description over a year later in Delaware at the home of his lover and brother’s widow Hallie Biden in March 2018.

Hunter does not appear to have declared the diamond as income, which could constitute further tax violations.

Marco Polo is a registered nonprofit founded by Ziegler, 26, who worked as an aide in the White House Office of Trade and Manufacturing Policy from February 2019 to the end of the Trump administration.

Ziegler’s report could prove to be provocative to Democrats and to Hunter’s legal team, who have been talking tough and gearing up for the First Son’s defense both in the media and in the face of his federal criminal probe.

It refers to Joe Biden as the ‘pResident’, a reference to the conspiracy theory that his presidency is illegitimate due to supposed widespread election fraud.

Photographs of Joe are crudely photoshopped into Hunter’s naked selfies with prostitutes included in the document.

Family members of individuals named in the files on Hunter’s laptop are pictured in the report, sometimes with revealing photos taken from social media.

Ziegler himself is a lightning rod of controversy.

He has been scrutinized as the aide who reportedly arranged a 2020 Oval office meeting where former national security adviser Michael Flynn and lawyer Sidney Powell tried to convince Trump to order the seizure of voting machines in an effort to overturn the presidential election result.

In July he appeared before the House Jan. 6 committee investigating the 2021 riot at the Capitol, then released a 27-minute video calling the panel racist against white people and calling female former White House colleagues who spoke out against Trump ‘thots and hoes’.

Hunter’s lawyer Kevin Morris has already had a spat with Marco Polo.

An operative working for the organization struck up a text conversation with him in May this year while posing as an ally to Hunter’s defense team.

When the trickster revealed his identity a week later, a furious Morris called him a ‘f***ing moron’ and told him ‘I’m going to take all your money’, ‘I know where you live’, ‘I’m coming to get you’, and ‘You’re going to enjoy being a buttboy for 20 years dude. Lube up’.