Watch: Hunter Using Your Tax Dollars to Fly to His Vacation Spot Disgraced first son Hunter Biden joined his father on Air Force One Wednesday for a flight to a family vacation on Kiawah Island, South Carolina — as Republicans slam the FBI for a “double standard” in raiding former President Trump’s residence, but neither of the Bidens’ homes.

Hunter Biden often involved his father Joe in foreign business dealsand is under federal investigation for tax fraud, money laundering and unregistered lobbying — but there’s no indication that either father or son have been raided by the FBI in connection with the long-running investigation.

Hunter Biden, 52, his wife Melissa Cohen, and his young son Beau met the president at Joint Base Andrews in Maryland for the flight just two days after the FBI served a search warrant at Trump’s Mar-a-Lago estate, reportedly to retrieve presidential records that may contain classified information.

The Justice Department has said little about the Trump raid and the White House insists Biden didn’t know about it ahead of time, but Trump called it “political targeting at the highest level.” Trump nixed the Supreme Court nomination of Attorney General Merrick Garland, who supervises the FBI.

Florida Republican Gov. Ron DeSantis said that the FBI’s treatment of Trump as opposed to the Bidens showed a “Banana Republic”-style legal system.

“The raid of [Mar-a-Lago] is another escalation in the weaponization of federal agencies against the Regime’s political opponents, while people like Hunter Biden get treated with kid gloves,” DeSantis tweeted. 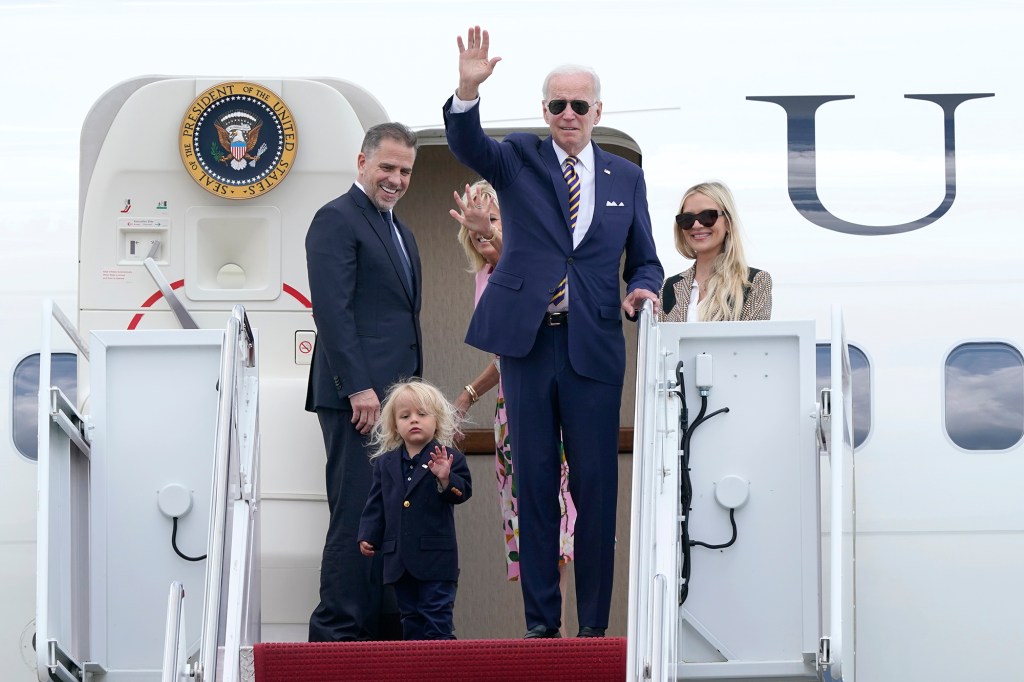 Former Secretary of State Mike Pompeo tweeted Tuesday: “Look at what the DOJ did last night to President Trump, while it slow-rolls and looks the other way on Hunter Biden.”

Rep. Tim Walberg (R-Mich.) tweeted, “The raid on President Trump’s home sets a dangerous precedent and takes the targeting of political opponents to an alarming new level. It also underscores a blatant double standard with the free pass given to Hunter Biden.”

Rep. Connie Conway (R-Calif.), wrote, “There’s a double standard in how the FBI treats Hillary Clinton/Hunter Biden and how they treat Trump, his associates, and even parents speaking out at school board meetings. Americans’ faith in the FBI is collapsing because we know politicized justice is not justice at all.”

Trump’s legal team has not released a copy of the FBI search warrant, which could clarify the purpose of the raid. In addition to his handling of federal records, the former president reportedly is under investigation for his efforts to challenge his loss in the 2020 election.

Delaware computer repairman John Paul Mac Isaac provided the laptop to the FBI nearly one year before The Post revealed some of its bombshell contents in October 2020, including evidence that Hunter Biden introduced his vice-president father to an executive from Ukrainian gas company Burisma — which paid the then-second son as much as $1 million per year to serve on its board — and emails regarding a proposed Chinese business deal that said the “big guy”would get a 10% stake “held by H.”

Hunter Biden recently paid the IRS about $2 million in an acknowledgement that he failed to hand over taxes on a windfall of foreign income. The funds reportedly were provided by Hollywood lawyer Kevin Morris, but it’s unclear what strings are attached and the repayment doesn’t prevent prosecution.

The first son’s overseas dealings gained significant attention this year when the Washington Post and New York Times in March belatedly verified documents from the laptop.

Ahead of the 2020 election, 51 former intelligence community leaders — including five former CIA directors — said the cache of documents could be Russian disinformation and both Twitter and Facebook censored The Post reporting, with Twitter asserting without evidencethat the documents may have been “hacked.”

Congressional Republicans say they will launch an investigation of various Biden family enterprises and the president’s link to them if they retake power following the November midterm elections.

Joe Biden’s involvement in his son’s business deals generally is murky — and any continued partnership would be difficult to detect because Biden does not release visitor logs for his Delaware residences, where he was present roughly one quarter of days during his first year in office.

Emails from Hunter Biden’s laptop indicate that Joe Biden, as vice president, attended a 2015 DC dinner with a group of his son’s associates from Ukraine, Russia and Kazakhstan. A photo depicts Joe Biden posing with the Kazakhstani group and one day after the dinner, Vadym Pozharskyi, an executive at Burisma, emailed the then-second son to thank him for the opportunity to meet his father.

Russian billionaire Yelena Baturina, an alleged attendee of the 2015 dinner and the widow of a former mayor of Moscow, has not faced US sanctions this year in response to Russia’s invasion of Ukraine — despite Biden sanctioning many other members of Russia’s elite.

In China, Joe Biden allegedly was involved with his son’s dealings with CEFC China Energy, which the Washington Post reported paid Hunter Biden and his uncle Jim Biden $4.8 million in 2017 and 2018.

Former Hunter Biden business partner Tony Bobulinski says that he spoke with Joe Biden in May 2017 about the CEFC deal and a May 13, 2017, email says that the “big guy” would get a 10% stake in a new corporate entity. Bobulinski and that email’s author, James Gilliar,identified the president as the “big guy.”

Also in China, Hunter Biden cofounded an investment firm called BHR Partners in 2013 less than two weeks after flying with his father to Beijing aboard Air Force Two. Hunter even introduced Joe Biden to BHR CEO Jonathan Li in the lobby of a hotel in China’s capital.

Joe Biden has appeared to be involved with his son’s business pursuits on other occasions as well.

Photos and emails from Hunter Biden’s laptop indicate that Joe Biden in 2015 hosted his son and a group of Mexican business associates at the vice president’s official residence. The elder Biden posed for a photo with Hunter and a group that included Mexican billionaires Carlos Slim and Miguel Alemán Velasco.

In 2016, Hunter Biden apparently emailed one of his Mexican associates while aboard Air Force Two on an official visit to Mexico, complaining that he hadn’t received reciprocal business favors after “I have brought every single person you have ever asked me to bring to the F’ing White House and the Vice President’s house and the inauguration.”

At his 2020 impeachment trial for pressuring Ukraine to investigate the Bidens, Trump’s defense team cited visitor logs that showed Joe Biden met with his son’s partner Devon Archer on April 16, 2014, around the time both Hunter Biden and Archer joined the Burisma board.

Since his father became president, Hunter Biden has launched an art career seeking as much as $500,000 for his novice works.

The White House developed a plan for those sales to be theoretically anonymous to prevent possible influence-peddling, but ethics experts say that the arrangement actually creates greater corruption concerns.

Hunter received at least $375,000 last year for five prints at a Hollywood art show attended by one of his father’s ambassador nominees, Los Angeles Mayor Eric Garcetti. It’s unclear how many additional sales he may have made. Reuters Spins Its Own Poll to Make Trump Look Unpopular